Displays: what are they good for? (absolutely nothing?)

P.S. (Pre-script in this case, not post.) I wrote this whole blog post entitled, "Displays: what is really the point?", did a bit of research before I published it and found that David Didau (@learningspy) wrote a very similar one two years ago called, "What's the point of classroom displays?" which you can read here. So I adapted it a bit, and rather than regurgitating what David has said, this is more a showcase of what I have chosen to display on my walls this year. Or this term, at least. Please note that I do not think displays are "good for nothing" as said in the title (hence the question marks) - I just wanted to reference that song :)

When I was a student, I used to love doing displays for my mentors; it was a time to put on some music, relax and pull out my "artistic" side for an hour two. However, now, the idea of putting up displays makes me think of papercuts, a sore back, not being able to find the right size of bloody staple for the staple gun, putting a staple in too far so I can't pull it out, not putting it in far enough so a child could get their finger under it, running out of backing paper halfway through backing a board, only being able to find the most garish of backing paper/borders because apparently you were the last one to do your displays that term... you get the picture.

Our curriculum co-ordinator took a group of children on a "classroom display" learning walk a few months ago and asked their opinions on the displays around the school, particularly in their own classroom. The results were surprisingly negative, with one comment even saying that they "fade[d] into the background". Of course, being the reflective practitioner that I am (I almost feel as if I'm writing a supporting statement for a job all over again...), this really made me think about what exactly I'm putting up on my walls.

Even though all the children asked said they "only looked once" at boards displaying children's work, even if it included their own, I do see the benefit. However, this year, I wanted to try putting something up on my all boards that the children will use as often as possible; I'll ask the children at the end of the term which they've found the most useful and adapt accordingly. An experiment, if you will :)

Please note - these horrendously lurid colours were the best of the worst left in the cupboard. I read somewhere that children work best in a calm environment, with the less distractions around them, the better, which totally goes against everything in any primary classroom you'll go into. If I was a professional blogger, I'd of course find the source of that little gem of noteworthy research, however, a) I'm not, b) I can't for the life of me remember where I read that, and c) I quite frankly can't be bothered to look.

Anyway, on to the displays... 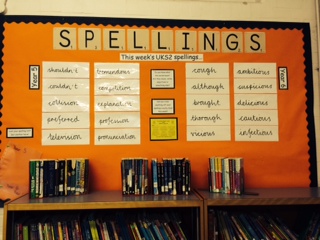 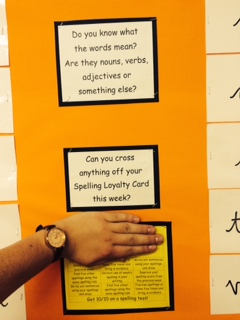 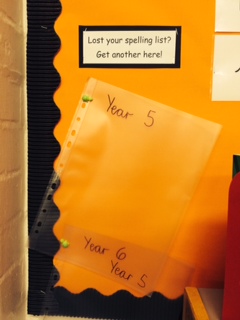 I have been made KS2 SPAG co-ordinator this year, and this is one of my ideas to try and raise our spelling results. (Which I think is quite ridiculous, as I don't really believe you can teach spelling. You can either do it or you can't. But that's for another time.) Our school is open plan, and this display is on the wall that most of the children in years 5/6 walk through in my classroom. (By the way, for those that are wondering, spellings are taken from the Rising Stars spelling test scheme.) 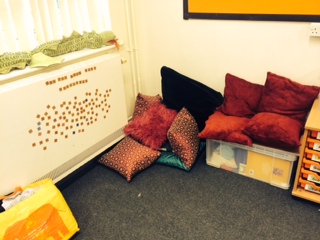 This is my reading corner. The display in the top right corner is called, "The imagination station..." (got a bit carried away there) and I'm hoping to put up pictures of the children doing "extreme reading" which will be their first bit of English homework :) 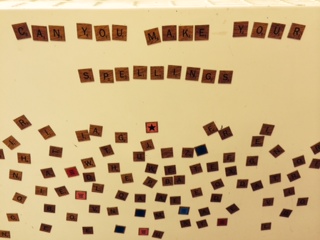 Close up of the Scrabble tiles on the radiator (not turned on!) - it annoyed me so much that there was no question mark that I nearly used a Sharpie on one of the other tiles to make my own. 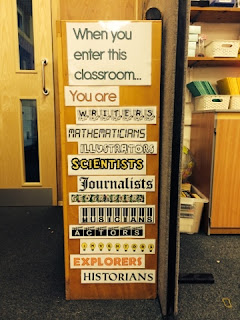 Not a display, just wanted to cover up a space. I printed/laminated/cut these last summer and never used them. 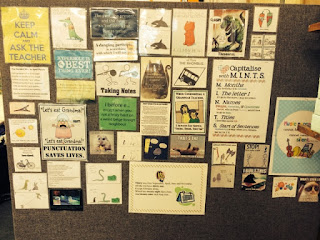 Again, not a display, but this is probably my most "looked-at" part of the classroom. Bar a few informative posters, most of them are just puns, and most of them are more for me than the kids. ("A dangling participle is something "up with which I will not put". - Winston Churchill" is my favourite!) 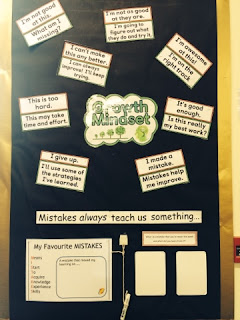 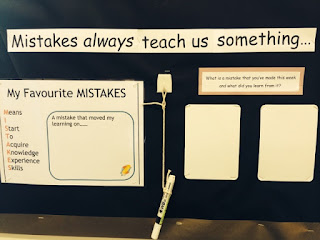 We started implementing the growth mindset language throughout the school last year and the children have really got on board with it. I had a huge board dedicated to it last year, but I opted for a slightly more subtle one this time. (I say subtle, I chose a gold border. That is subtle for a primary classroom.) 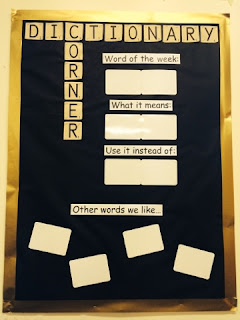 Some of you may have seen my "dictionary corner" display in my last classroom. I've adapted it a bit this time. Just need to add a few little bits on that left side because the assymetry is bothering me... 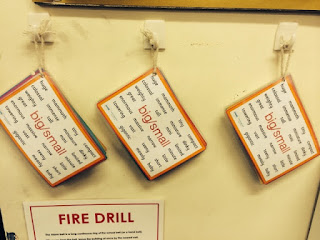 These are my synonym booklets hanging below the dictionary board. 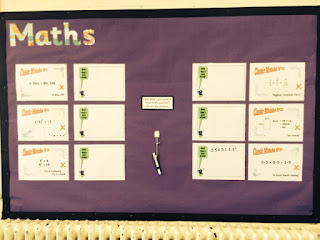 This is missing the second half of the title - it should say, "Maths misconceptions". I just got SO bored of cutting out letters. That will have to be an INSET day job. 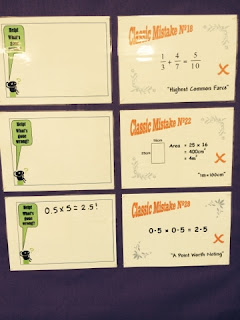 Some sneaky teacher has already written on it... the cheek! 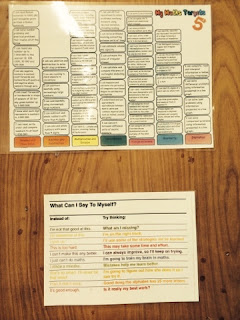 I like having these reminders around (mainly for me). 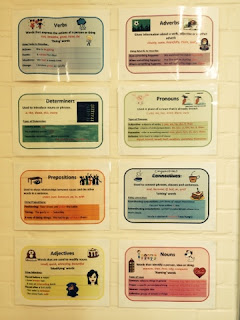 Children use these a lot. 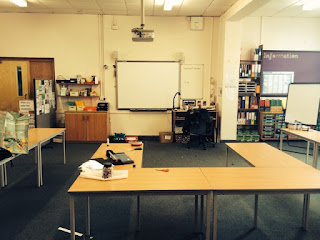 This is the view from the back of the classroom. My last classroom was incredibly small (it wasn't originally intended to be a classroom) so I'm excited to have a room with carpet space! 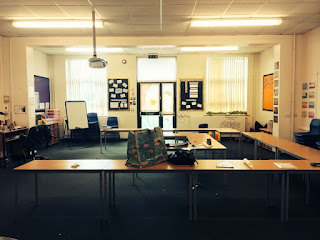 View from the side. (I'm standing in the walk-through corridor - it is an open plan classroom.) 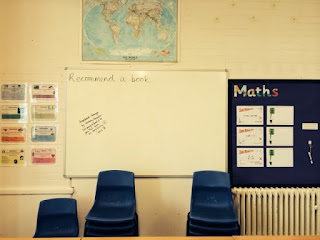 Not really sure what I want to use this whiteboard for as it's at the back of the classroom. I'm thinking a working wall, but for now it's going to serve as a book recommendations wall. If you have any brilliant ideas, please let me know! 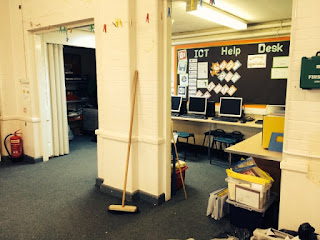 Please ignore the broom. Cleaners haven't been in...
I'm very lucky to have a little "well" off of my room with a set of computers (which can be used by any of the four classes in our team) and a desk for my TA. That room in the left is the UKS2 art storage cupboard. 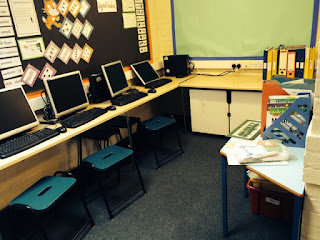 Another view inside the well (TA desk on the right).

Now, one display I did really want to put up was one suggested by Andy Hind (@andyhind_ES4S - he's an educational consultant who's led some of the brilliant training I've been on) - a "reflection wall". This would consist of putting a particular LO of the week in the middle (on a whiteboard) with questions such as these around the edge:
What helped you when something got tricky about learning to... (LO)?
What do you need more help with about learning to... (LO)?
How would you change this activity for another group/class who were learning to... (LO)?
... and so on.

Find me on Twitter @_MissieBee (previously @Miss_RQT)
Posted by Unknown at 18:40